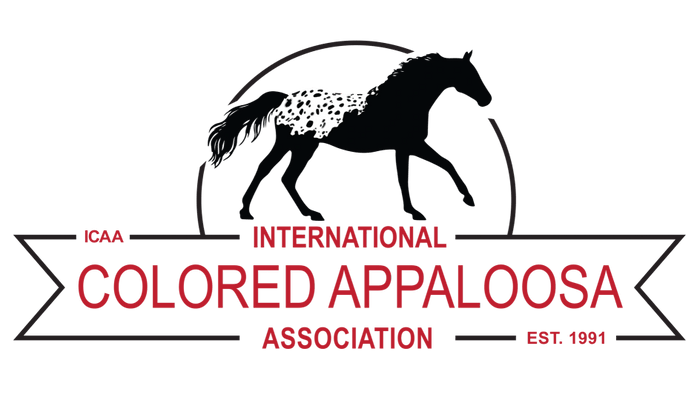 While spotted horses go back in history for thousands of years, the commonly accepted history of spotted horses in the United States has roots deeply imbedded in the Nez Perce Indians of the Northwest.  The name of our spotted horses was derived from the Palouse River country where they were bred by the Nez Perce.  They were first known as a Palouse Horse, which turned into Apalousy Horse, which eventually became Appaloosa.

Although many valid theories exist about the development of the Appaloosa as a breed that should not be overlooked, ApHC legend has it that the Nez Perce were largely responsible for the development of the Appaloosa.  The Nez Perce were renowned for their horsemanship skills and were the only tribe known to selectively breed their horses for intelligence, strength and beauty.  Lesser quality horses were culled and/or gelded.  Their most valuable horses were used as war horses and for hunting

​In May of 1877, another of many treaties between the US government and the Nez Perce was broken; all non-treaty Nez Perce were to be placed on a reservation.  Hearing this, the Nez Perce fled to Canada.  It is said that seven hundred fifty Nez Perce, two-thirds of them women, children and elderly, along with 2000 of their own horses, traveled 1170 miles along what is now known as the Nez Perce Trail.  They battled and eluded more than 2000 US Army soldiers and other pursuers while traveling over extremely rough mountain country.  The fact that they were able to make this journey under the conditions they faced is attributed to their tough, well-bred Appaloosa horses.

Starving and exhausted, the tribe was resting less than 40 miles from the Canadian border when the Army finally caught up to them.  This is where, on October 5th, 1877, Chief Joseph surrendered and made his famous "I will fight no more forever" speech.  According to the legend, after the surrender most of their herd was shot by the Army.  The remaining horses were turned loose or given to farmers who crossed them with various other breeds, including draft horses.  Within 60 years the Appaloosa was on the brink of extinction.

​​In 1937, The Western Horseman published an article by Dr Francis Haines titled, "The Appaloosa or Palouse Horse".  This ignited an interest in the breed and began its trek back from extinction.  The ApHC was founded in 1938 with “seed stock” of the type of horse they wanted to produce; these horses are called their foundation stock.  Although they are the foundation of the Appaloosa industry yet today, the ApHC "F" horses, were simply ​the horses that were there when records began being kept on breeding and resulting offspring.   Many of the ApHC "F" horses came from an unknown sire and/or dam, or both their sire and dam were mixed with grade and others breeds.​

​Some horses have a known sire and dam.  For example, Mansfield’s Comanche (ApHA F-3096) was sired by Dr Howard, a Thoroughbred, and his dam was Juanita. Mansfield’s Comanche was at least half Thoroughbred, so he cannot be 100% Appaloosa.  Then there is Peavy Bimbo (ApHC F-4557); his sire was Little Joe (AQHA P-430), and his dam was Chipeta (AQHA P-1250).  Another example is Joker B (ApHC F-678), sired by Red Dog (AQHA P-55), and out of Blue Vitrol, an unregistered, one quarter “appaloosa” mare with a Quarter Horse sire and Old Fred as a maternal grandsire.  These are only a few examples of many.  The ApHC "F" horses’ ability to pass on dominant Appaloosa genetics was proven through production.

We love these horses of the past and they are very important to the Appaloosa breed, but what were they?  What breeding is behind them?  In most cases, no one really knows.  It is even uncertain whether or not historic breeding documentation is accurate.  These horses are not 100% anything.  The percentage of "F" numbered ApHC horses in a pedigree does not indicate purity!

It is important to note that ICAA has something that the ApHC did not have during its founding years. ICAA has many years of documented pedigrees to work from that did not exist during the formation of the ApHC.

These foundation horses and modern crosses  cannot realistically be called purebred as defined by current scientific standards.  They are simply not 100% Appaloosa.  It is for this specific reason ICAA chose to use the full-generation concept, of eight generations with no out-crossing to produce a true, purebred Appaloosa, following the generally accepted genealogy method for generation identification.